Using, learning, programming and modding the Gigatron and anything related.
Forum rules
Be nice. No drama.
Post Reply
24 posts

I have the same programmer for my project. I started with the Windows software and entered machine code programs directly in hex! That was pretty painful, so I developed some automated tools. I have a build script that runs on my MacBook and calls minipro to burn the ROM image. The specific command is:

My build script compiles the ROM image as an Intel Hex file (ihex) and puts in the `build/output` directory. The chip I'm using is a 256k byte NOR flash (SST39SF020A). You'll have ot figure out the correct name for your ROM. The programmer is very picky, but it's not going to blow anything up if you get it wrong. You just have to do some trial and error.
Top

The SST39SF020A is a great device and seems to be readily available, I used two SST39SF010A's in my ROM switcher here: viewtopic.php?f=4&t=34

If you're going to be constantly updating/changing the ROM, (like Alastair is), then using a Flash EEPROM like the SST39SF020A will make your life much less tedious, as it saves a lot of time in not having to constantly UV erase EPROM's. Be aware that in general FLASH EEPROM devices like the SST39SF020A are not pin compatible with EPROM devices like the 27C1024, you would need to build an adapter or PCB.

But then of course the case lid will no longer fit...it's a bit of a rabbit hole and is what caused me to build my own ROM switcher.

You could also go even further like Gesari did here: viewtopic.php?f=4&t=112

Something I eventually want to get around to is designing a good looking and functional cartridge port that allows completely different/new Native games/applications/languages/OS's to be used with just a simple cartridge swap; but that's definitely long term.
Top

The TL866A is probably the way to go indeed. It has command line tools for Linux, BSD, macOS.

Buying a new EPROM is not mandatory, you can wipe the existing one and reprogram it.

We've included a UV-erasable EPROM because I think that is much more retro than an electrically erasable EPROM, but of course these can be used as well if wired properly.
Top

Thank you klf, at67, alastair, and walter for your guidance! Your responses made me feel a lot more confident about ordering the proper parts. I ended up going with the TL866II, a UV eraser (it was around $20, hopefully it will suffice), a ZIF socket, and a handful of extra EPROMS for keeping different ROM versions on deck. I probably won't be switching ROMS too often, but I definitely like having the option as that may change in the future. I really like the idea about a cartridge port for the gigatron, that would be really cool and something I'd be interested in for sure!
Top

Both files are attached.

Very clever! It worked well on my Gigatron (ROMv4). The slight delay was there, but not very noticeable.

On a somewhat related note, my EPROM eraser and extra M27C1024 chips both arrived today by mail and I was able to upgrade to ROMv5a.

I had originally bought a cheap EPROM eraser on Amazon but the bulb didn't work. I returned it and got a used Ultralite Production EPROM Eraser on eBay which works just fine. I kept the original ROMv4 EPROM and programmed a couple of the new M27C1024s with ROMv5a-- one for my Gigatron and one to test the UV eraser. Minipro for Linux worked great with the TL866II Plus, here is the command I used for the M27C1024 if anyone is interested: 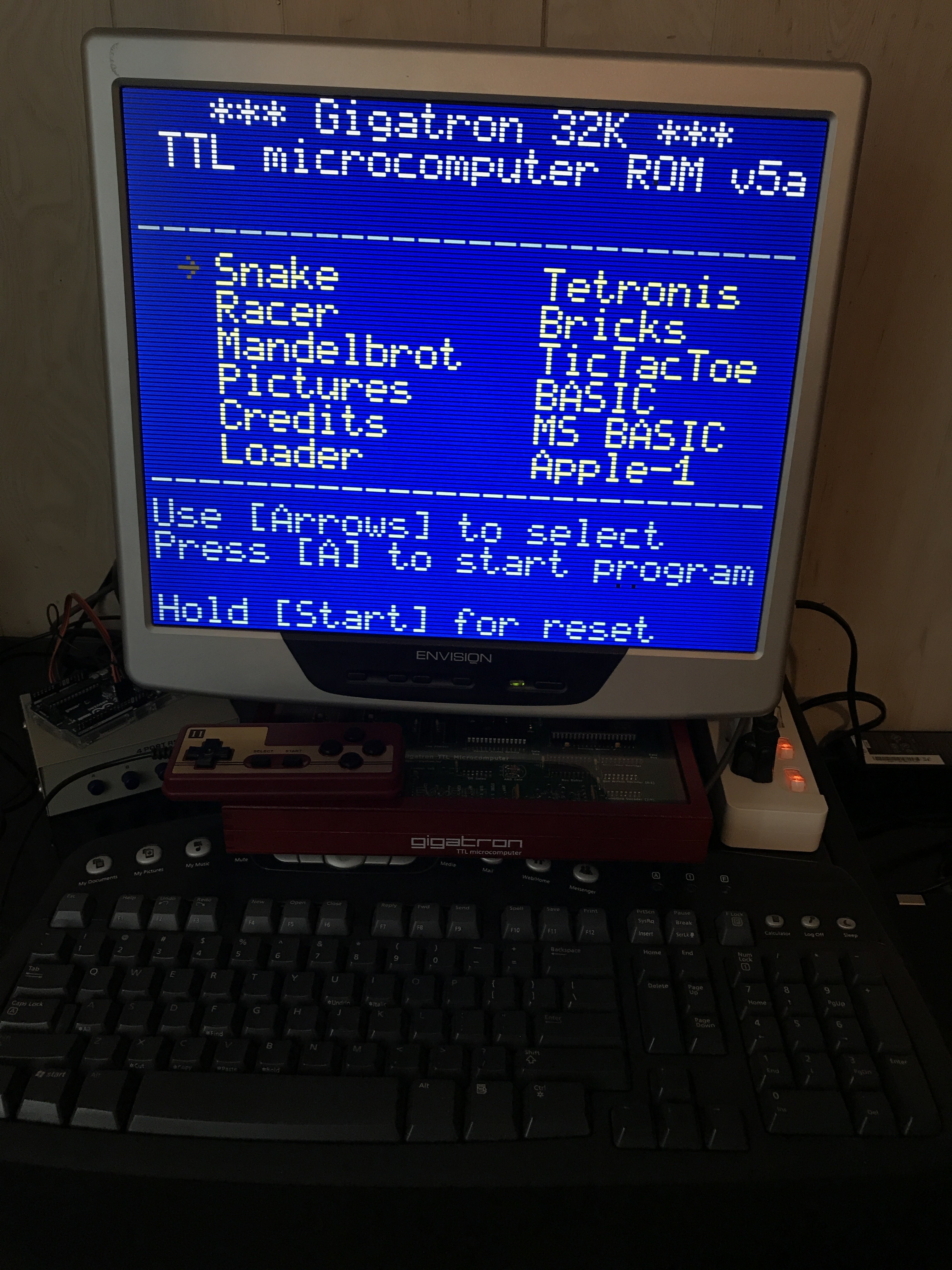 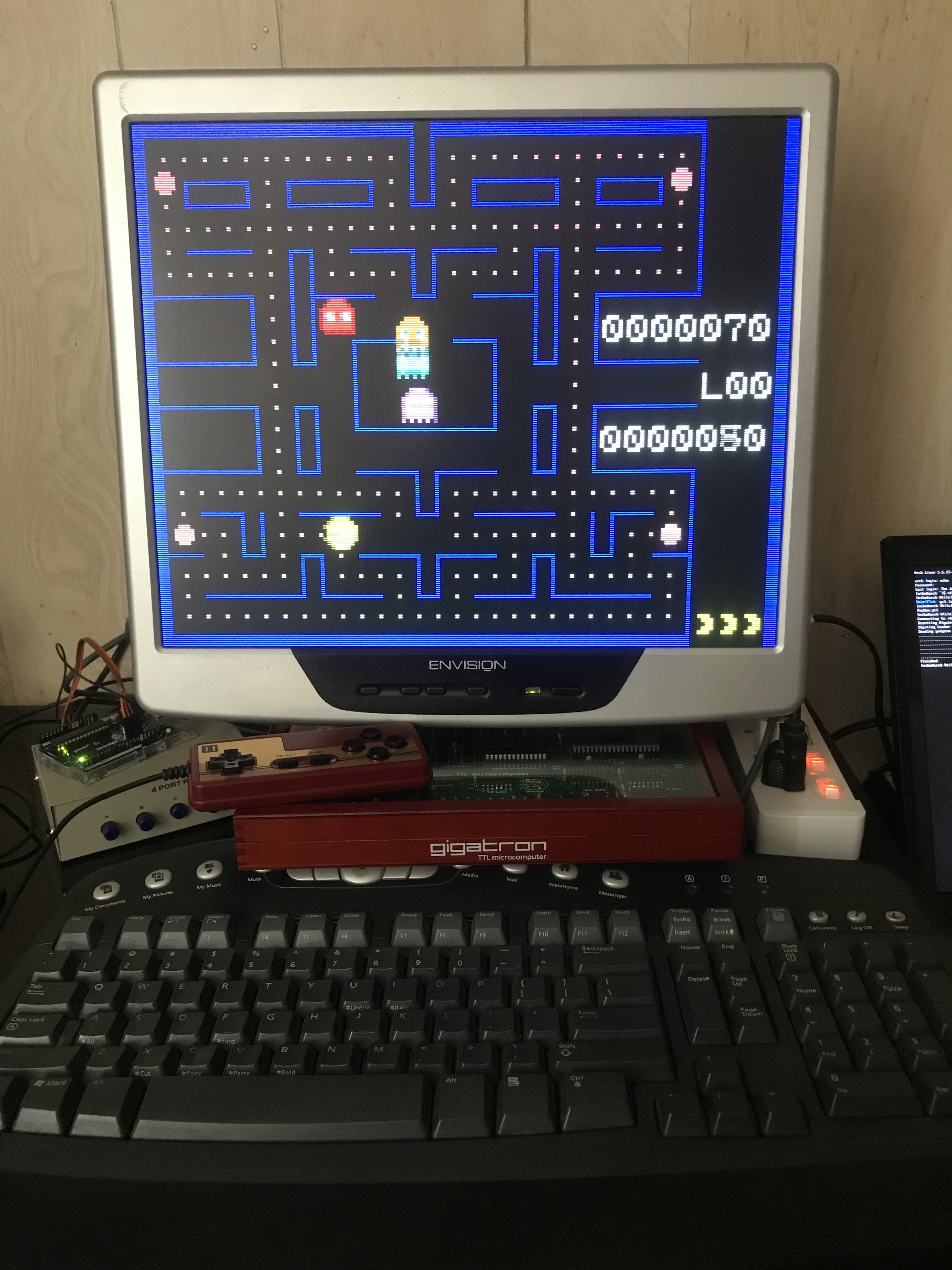 Interesting thread - not only a fantastic looking game, but a ROM upgrade. Hopefully something that might help pathe my way through a similar process... sometime in the not too distant future (I hope). Great work everyone!
Top

I've made a PucMon-only ROM and put it online with the emulator: https://gigatron.io/emu-pucmon/
Top

If you put them side by side or play them straight after each other, (as you noted), the discrepancies are pretty obvious. But the ROMv3 still plays a decent game, so I am pretty happy with the way it turned out.

CALLI is an amazing addition to the ROM, it really makes cross compiled code to the Gigatron significantly more efficient; especially as you approach it's memory fragmentation limitations.


RetroCode wrote: ↑02 Jul 2020, 20:41 Hopefully something that might help pathe my way through a similar process... sometime in the not too distant future (I hope). Great work everyone!

Once you can upload code and swap ROM's on your Gigatron, it really opens up a plethora of possibilities.

Dear "at67", you really - really - did a GREAT work: I've seen the emulator, then the basic compiler and ... this application that I think is the nicest one so far on Gigatron!!!

Regarding the implementation I've seen you've followed some nice guide for the AI, anyway if you didn't see there is also a nice video on it: https://www.youtube.com/watch?v=ataGotQ7ir8&t=943s

I've noticed anyway a little strange behaviour for ghost: when you hit them and they return in the cage they are still blue/scared, while I think normally they would be in their normal non-scared state.