natevw wrote: ↑
12 Jun 2019, 19:13
My other interest in this expansion though is actually to see if I could use my Gigatron as an ASCII terminal for my PiDP-11 somehow

[I think I want a Gigatron to drive my newly arrived IMSAI 8080 replica kit.]

To those of you playing along at home, Jörg's clever signal mapping is implemented in the provisional SYS functions, but not in these "prototype/(pre-)alpha" boards yet. I'm too lazy to make new boards for as long as software support still only exists at the lowest possible level. Therefore you'll need wiring patches with these. With sockets the lid won't close any longer, so this requires some planning to get it right in one go.

The design difference is this:

The wiring patches I applied myself:

Furthermore, the resistor values are 2.2K, not 10K. 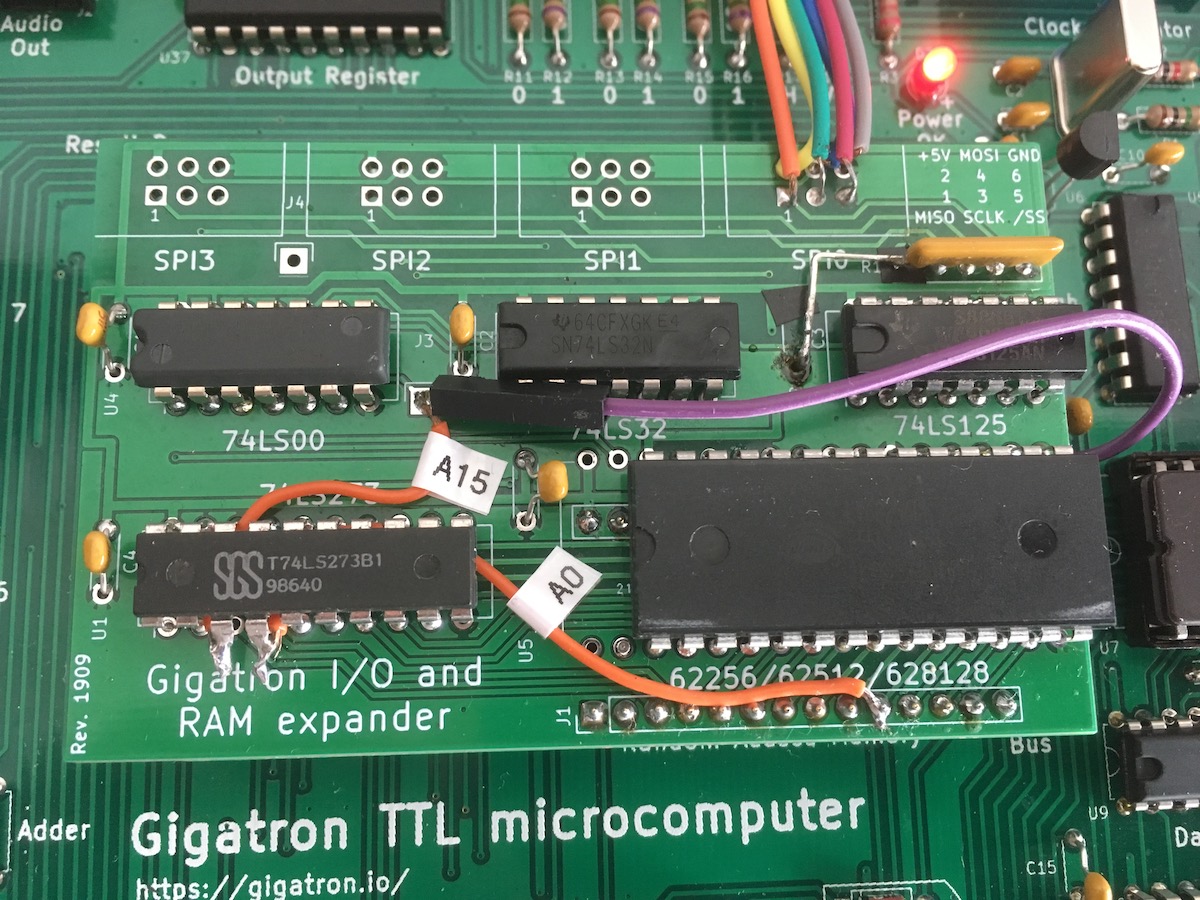 
You can see I didn't patch the banking at all, and I even just soldered in a 32K memory. The improvised resistor ground pad is damaged and scorched because I replaced these 4 times.

On the software front, last month the provisional SPI function has relocated in the development ROM. The addresses should be stable after this. The code I now toggle in for 16 blinking lights is this:

This key press detection is a bit simple, and often it bails out on the original `Enter' that started the program. So you have to hit that very briefly.

This should fully document what's required to make these work. After the summer break I hope I can return to this development and expand on the software for card reading.
Top

Thanks for the elaborate update, Marcel: this was a good kickstart for me.

The soldering and modification was more or less painless; here are some snapshots of my progress (sorry for the bad quality pictures): 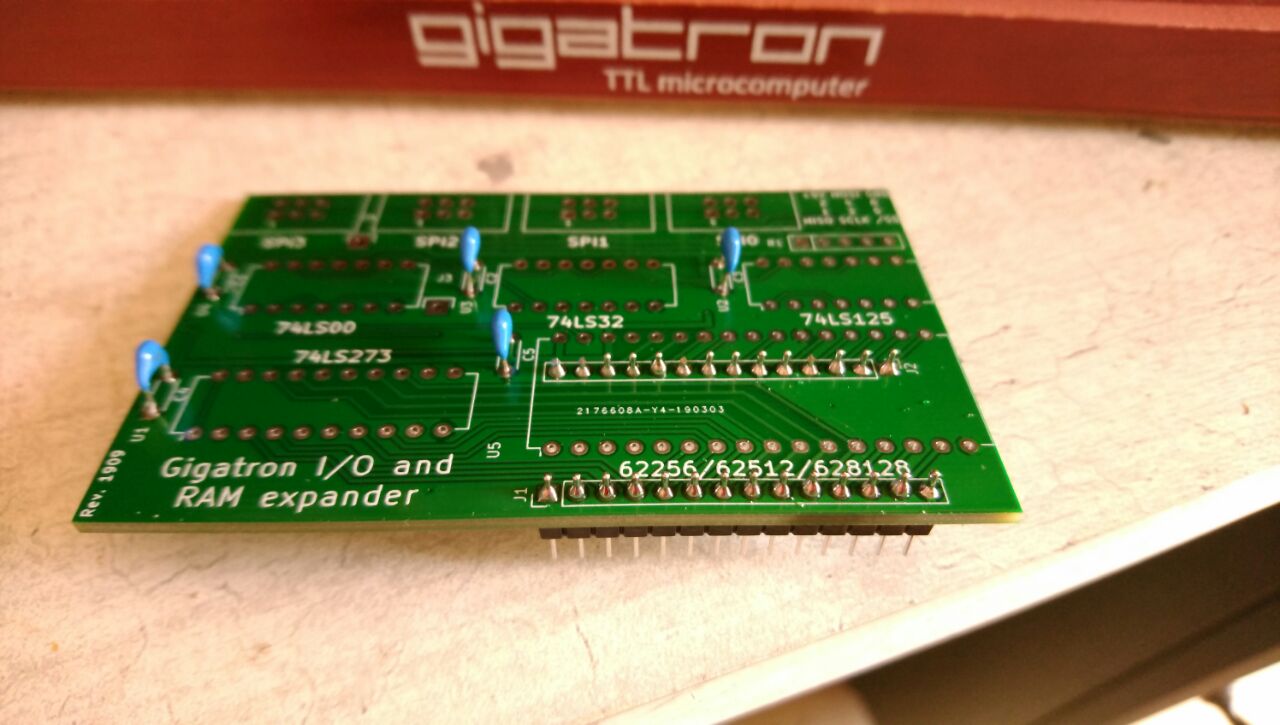 Note that I had to cut off a bit of Expander J2 pins 4, 9 and 13 (Gigatron RAM socket pins 18, 23 and 27) for the IC socket to fit snugly on top.
It might be hard to see on the picture.
I had positive results using a set of 0.47mm diameter connector pins (these to be exact, note the're not symmetrical) 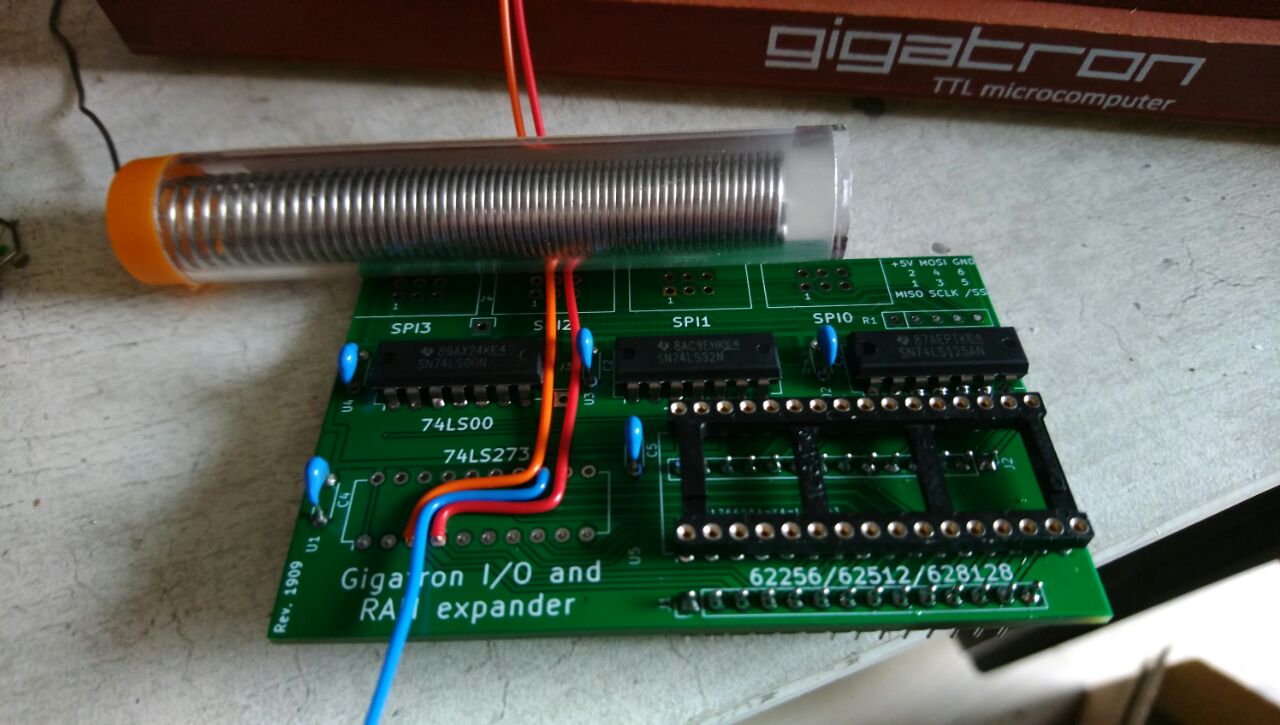 I ran the patchcables between the board and IC but that made the IC fit less optimal; still I was able to solder all pins. 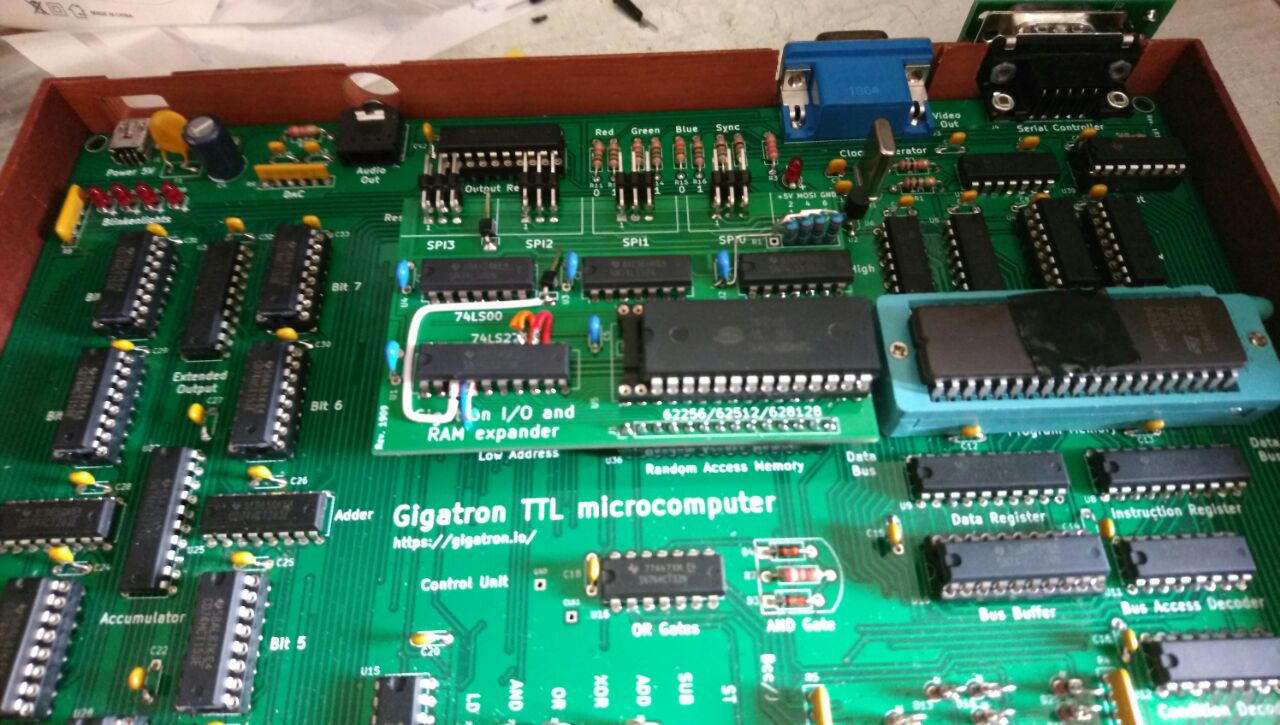 As you can see, I used a socket for the RAM (and a lot of sockets on the Gigatron as well; make sure you don't use sockets in the Gigatron for U29, U30, U32 and U33 as they will then touch the SPI header solder connection.

Also, by using a RAM socket the lid floats about 3mm on top of the Gigatron, but the ridges are high enough to keep the lid in place.

Since I didn't have an expander IC available, I connected an Arduino in slave mode (with this information and a modified version of this code) Don't use the arduino SPI programming header since SS is tied to reset to initialize the bootloader which will crash the Gigatron.

I would only recommend one small improvement for the next revision expander board: to place J3 a bit more 'south', to make room for a right angle pin pointing 'east'.
Top

It took me a while to get everything on track (and I'm not sure if I can spend more time on it this week), but I have a proof of concept written in C that outputs the Gigatron's keyboard input on screen (using tinyfont) and to the SPI0 port as well.

Here is my result: https://youtu.be/R9liFeYZV7E

function; but for a proof of concept, it works.

(Note that I had to modify the Makefile to get it to build: I removed the quotes around

Congratulations! That's a really excellent achievement, and clearly a lot of effort and dedication when into this result. Thanks for sharing!


(Note that I had to modify the Makefile to get it to build: I removed the quotes around

May I ask what platform and/or "make" program you're using? I like to improve the Makefile. I usually test just on macOS and with that I sometimes miss things like this.

[Edit: I get it! The issue is now addressed in GitHub. Thanks for reporting]
Top

This is great progress, and something I must reproduce on my Gigatron.

I like your thinking of using an Arduino as a programmable SPI slave. You can program the Arduino to do whatever you want in response to a few SPI commands.

There is scope for a common set of commands to access the I/O. Firmata and Txtzyme are two that spring to mind.


The SPI slave Arduino can act as GPIO, a UART, 6 channels of ADC, timers and PWM, additional RAM, ROM or EEPROM and interface with a whole variety of additional low cost, off the shelf hardware. It could even support an Ethernet controller such as the Wiznet W5100 or the Microchip ENC28J60 which would allow the Gigatron access to the Web.

It might even simplify the means to access an SD card. The Arduino could act as the "disk controller" and just serve a binary or ascii file back to the Gigatron. If the ATmega328P is too small, then there is always the ATmega1284P with 128K ROM, 16K RAM and 32 I/O pins which could be the ultimate peripheral.

Is this cheating? No - ever since the early 1960s, computers have used small specialised peripheral processors to handle I/O. Such as the CDC 160 https://en.wikipedia.org/wiki/CDC_160_series

Thanks Marcel and Ken.
To be fair, I'm just standing on the shoulders of giants here

Also, I want to mention that the original Newline function is genius to a level of mind boggling (for me least); it took me two days to figure out how the ScreenPos upper byte and videoTable offset were aligning at 'the right time'.
After I got the clue that their offsets go from 8 to 127, it was a bit more apparent to me, but I wasn't able to get the same results with the 5+1 pixel high tinyfont.
Also, since I'm using the SYS_VDrawBits_134 command (and leaving the last 2 bits zero), I'm not able to write the last line (or at least the wrap-around area) without crashing the Gigatron since I'm drawing outside the video memory. (a SYS_Draw3x5) that accepts a word would be a welcome feature here

I hope hook up the Gigatron to the network (or terminal server) one day, and with minimal changes to the current terminal and arduino proof of concept (exchange a byte every possible cycle) it might actually be really easy to create a VT05 terminal (although not implemented in Linux, but VT100 is).
Note that the ESP8266 wifi chips that can be programmed with the Arduino IDE also have a SPI slave possibility if I'm not mistaken. Yes, they have ridiculous amount of processing power, but it might be a nice shortcut to hookup the Gigatron to internet.

I also quickly looked whether it was easy to modify the built-in loader so I have the controller port free for a keyboard whilst being able to load a program via sendFile.py->Arduino serial->SPI but that at a first glance this seems more daunting than anticipated.

Not sure if it is the first connected Gigatron, but here is a teaser video where I connect over (Arduino) USB serial to my laptop:
https://youtu.be/vtE6ngzq8qA
(Sorry for the terrible video quality)

The blurry text on the left Linux terminal executes

I'm looking forwards to replicating this on my Gigatron.

I've just updated the Terminal code and Arduino code, but I have to add some remarks: If you want to test the Terminal in an emulator (without Expander hardware), you can edit the function:

to skip the SPI part and test, for example, arrow keys or some escape codes (<ESC> H is 'home', to mention just one)

But what about a generic expansion port/bus for memory-mapped peripherals? Could the SPI be one of such peripherals, having it's own memory address/range? Or should it be an integral part of Gigatron sometime in the future?
Top
Post Reply
97 posts