Yesterday I tested it, my test cycle (init, write a sector, read back) works at both 15KHz and 30KHz. I tested 2 cards, a 2GB SD card and a 4GB SDHC card, both are approx 4-6 years old.
So it should be possible to make a half or a complete SCK clock cycle per video line. I hope, this information helps a little bit.

Thanks, that's great news, it removes the potential roadblock. It makes a lot of sense that it should work in practice, but still...

Now there's a clear but long road ahead, SDcard support will take quite a bit of effort.
Top

nutson wrote: ↑07 Nov 2018, 10:02 I would love to see a board with additional I/O capabilities. I was already planning to assemble a gigatron board with a wire wrap socket for the RAM to be able to connect a hand wired expansion board (with a good old 8255 chip?) on the back of the Gigatron.

Now I looked into 8255. It's a neat beefy chip indeed. I can imagine it sitting on a daughterboard, perhaps combined with a RAM expansion and lots of LEDs for more blinking fun. Initially there's not even a need for a software upgrade, because BASIC can control the pins with PEEK and POKE. It will be biggish. Also the I/O chip is rather expensive, approx. 8 USD, which is a bit scary. 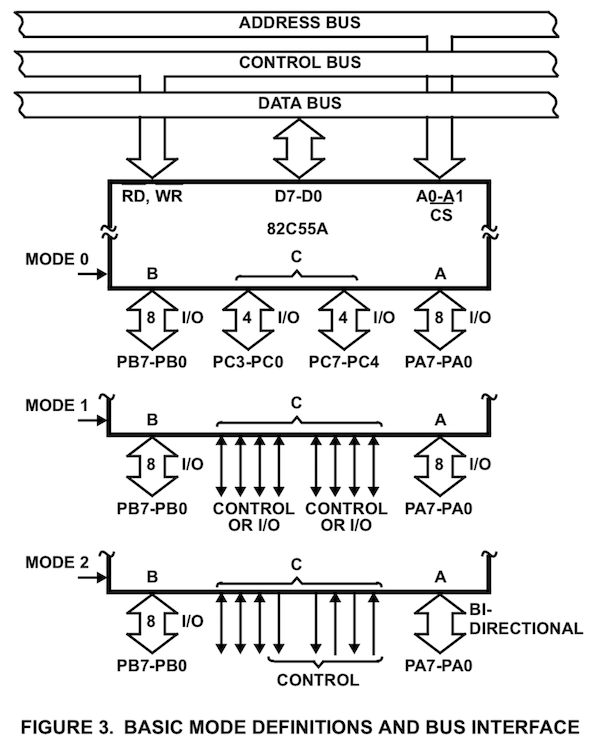 I had to read over this section several times, but I believe I'm starting to grasp it, modulo a couple of details I point out below. I like the direction it's taking!

Note 1: The concept is memory mapped I/O, where:

Note 2: The concept for SPI read is that data coming from an SPI slave (over the MISO line) doesn't enter the Gigatron data bus directly. Instead, it first enters the RAM through one of its address lines, and from there the RAM puts the correct bit value on the data bus. This works if the dedicated memory area is initialised properly. The 32K system doesn't have enough free memory space for doing that, so we need 64K. But we don't need a tristate buffer chip with its own enable support logic. Nice.


, probably it should be possible to make the upper 32K switchable if a 128K RAM is used

Note 3: I don't get the 128K story yet, or the upper 32K reference. But that's because lack of trying from my side. I park that for now.

Note 4: There is a data inversion done by the RAM. This undoes the inversion introduced later when calculating A10_RAM.

Note 5: You're using A10 below, but this memory initialisation pivots around A11. Is this a small oversight? I would expect the following initialisation:

Note 6: We take five address lines A11:A15 to distinguish I/O from RAM access. As stated, we do RAM reads for any I/O (reading or writing). Using the five lines means we have 1/32nd of the 64K address space in use for the I/O extension. So we lose just the top 2K of memory for user applications.

Note 8: Tiny BASIC v2 puts program variables at the top page of the available memory, and it lays out its arrays downwards from the top. This is done so that a 64K system has larger arrays than a 32K system. The memory size check during hard reset only tests memory presence in powers of two. So there is a conflict here to consider.

Note 9: The hard reset sequence in ROM page 0 always walks through the entire 16-bit RAM address space, and reads every byte. It does this to seed the entropy pool. (In the case of a 32K system, it reads every byte twice.) When hitting the top of the address space, this will result in activity on the SPI interface. This activity is deterministic, and perhaps we can arrange the address line mapping in a way to mitigate any unwanted effects of this.

the delay of the 74xx30 + inverter should be enough to register correct signals.

Note 12: I presume /CS1 and /CS2 are the slave select lines (and not RAM selects). Why do we need the inverted outputs to produce /CS1 and /CS2? Can't the driving software handle that inversion?


-if IOSEL=LOW, exchange A10 to the RAM with the MISO signal. This could be critical but we can say, we read only data
if SCK is HIGH. So we can reduce the path to an AND gatter. [gate? -MvK]

Note 13: Is that why A10 is having the double function? To avoid glitches? But A10 is not the same as SCK. I admit I need to put more thinking in this area.

Note 14: The MAU (Memory Address Unit) is always active, and so it can be glitchy at the beginning of a memory read cycle. That's also one of the reasons why the /WE signal is OR'ed with the clock: to prevent bad writes into memory. If the Y register contains all-ones (for example because we have just done a far jump high into the program memory), and somewhat later we perform a zero-page memory read, isn't it possible to glitch /IOSEL?

Note 15: Timing wise, this is adding nanoseconds to the critical path of a Gigatron cycle. It's perhaps not an issue for the 55ns RAM that comes with the kit edition. It's more likely to become an issue with the 70ns RAM that the Gigatron was originally designed for. Well, so be it. But your next idea solves that concern:


So OE remains low between two RAM acesses we can do a second ld[y,x] to compensate the longer access time.

Note 16: That's a perfectly valid solution! And also the reason why vCPU can't do it, I get it now. SYS functions are a possible solution indeed. We can also think of integrating it with the video/audio loop.

Note 17: That was a very high information density description, wow! Thank you so much! I do think I want to prototype this, and also look at the general availability of these IC types. From my understanding, we can go to a 4-slave or 6-slave configuration just as easily. The devil is in the details, and it's clear your have thought them through pretty well!

Note 18: I think I would prefer a decoder for driving the SPI selects, rather than independent address lines. This prevents enabling multiple SPI slaves through an accidental memory access from user code. That will become a short circuit, and that's not great? (Or is the MISO open collector, and this is not a concern?)
Top


Note 5: You're using A10 below, but this memory initialisation pivots around A11. Is this a small oversight?

Yes, that's right. I wrote this down before the idea of double use of A10 was born.


Note 13: Is that why A10 is having the double function? To avoid glitches? But A10 is not the same as SCK. I admit I need to put more thinking in this area.

The idea for the double function of A10 (SCK, data gate) I had later, the main thought was to reduce the reserved memory area from 4K to 2K.

I think, not. See my explanation to note 10.

I considered to not use A0 to A6. So it should be possible to use the X register as output value and put the MSB to MOSI when reading from I/O. So we will put the MSB of X and get the LSB of A in one cycle/command. Another way is to use the lower bits of X with:

but this needs additional cycles and code. My idea was also to put the SPI handling into the video/audio cycle. There might be a counter variable in the zeropage. If its bit 7 is zero, do audio/LED stuff, if not, exchange a bit via SPI and decrement this variable by 16. So the vCPU writes the byte to send, start code into the counter variable and waits until bit 7 of the counter variable is zero. This can be done with 3 system calls:


this (theoretic) code needs only 3 additional clocks in the video line code for non_spi cycles. Sound is stopped during SPI I/O but in my opinion this shouldn't a problem.

1. My emulation is not fast enough to distinguish between RAM and SPI acess, so its a good idea to use an 'unique' command for SPI access. For instance, ora [y,x]. This operation is currently not used by the GIGATRON ROM and there is no problem with compatibility.

2. For Note 14: We can add a dummy zeropage access to reset the IOSEL signal.

3. The SCK signal should be slightly delayed (for instance by 2 inverters) to get a setup time for MOSI.

My concern with note 14 is primarily that the extra logic might trigger spurious SPI events from regular code: e.g. reads (or actually any instruction) elsewhere in the Gigatron. After all, the MAU output isn't clocked. It can glitch at the beginning of the Gigatron cycle while switching between addressing modes. And Y has a double function, so it can hold arbitrary values. This combination of factors might trigger /IOSEL. At least, I see that as a potential risk.
Top

I decided to measure it on a standard Gigatron with 32K and ROM v3. Primary probe (yellow) on the A15 breakout. Secondary probe (blue) on CLK1 so we have a frame of reference. During normal operation one expects A15 always to remain low, because the software isn't trying to access non-existing RAM (except during hard reset).

A non-zero value for A15 can only come from the Y-register, and Y is also used for addressing the ROM. So we start the Pictures application: 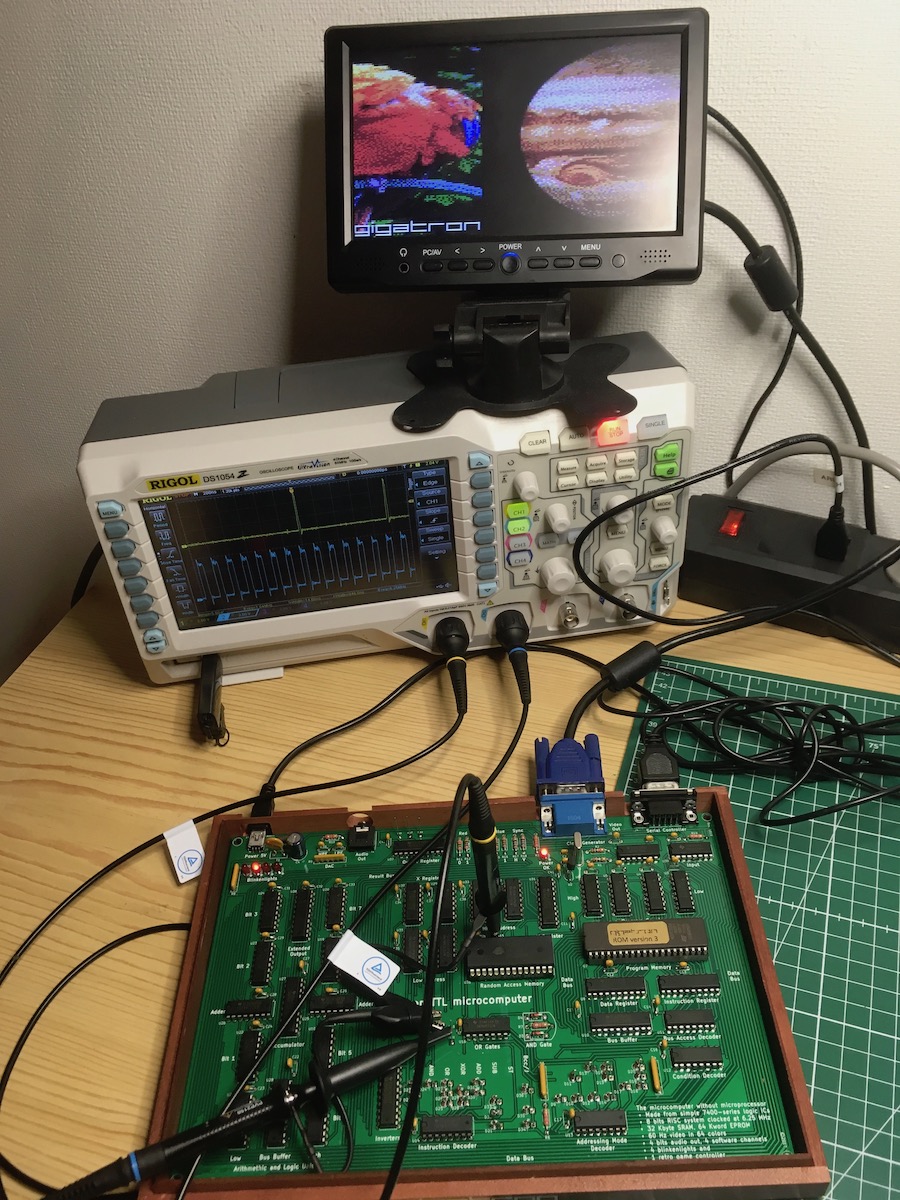 
Pictures also isn't trying to read or write into non-existing RAM. Still glitches appear on A15 while Jupiter is scrolling in (the yellow spikes). When the Parrot is scrolling in, there are no glitches. This is consistent with the theory: the data for the Parrot image is fully contained in the lower half of the ROM address space. The Jupiter image data protrudes into the upper half. 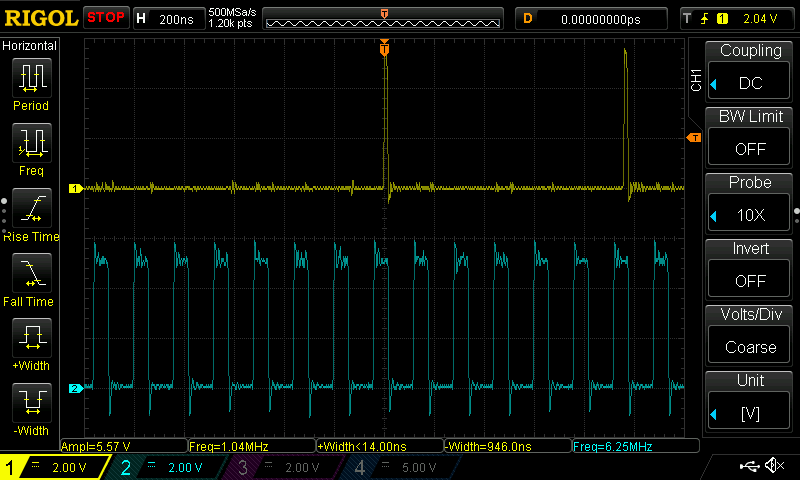 
Zooming in, these are about 15 ns in duration, and occur ~42 nanoseconds into the Gigatron cycle, in the first phase (φ1). The glitch ends just before φ2 of the clock cycle... Apparently it can take that long for the addressing mode to settle. 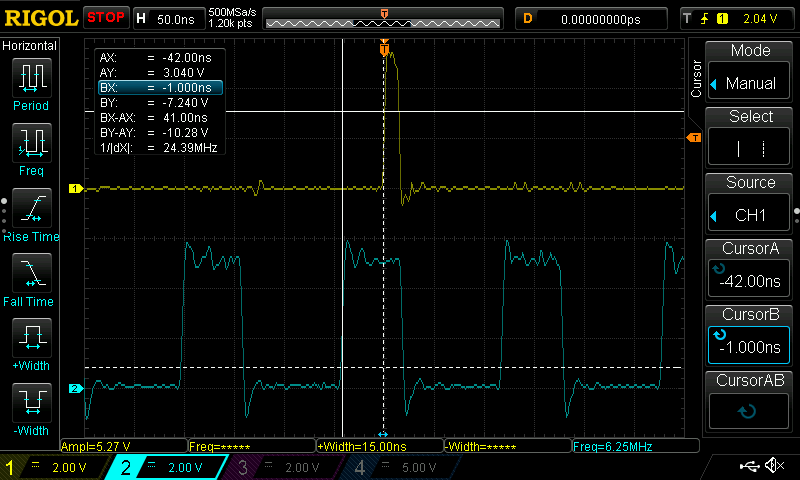 I think visually, so I converted your original proposal to a schematic. I believe it's pretty much a correct transcription, but not 100.0% sure of that. Also PDF and KiCAD files attached. [I spent most time fighting the standard KiCAD component library, as the 74LS30 has its output declared as input there.]

Please shoot... I need to give this a rest for a couple of days. But I believe we're gravitating towards something. 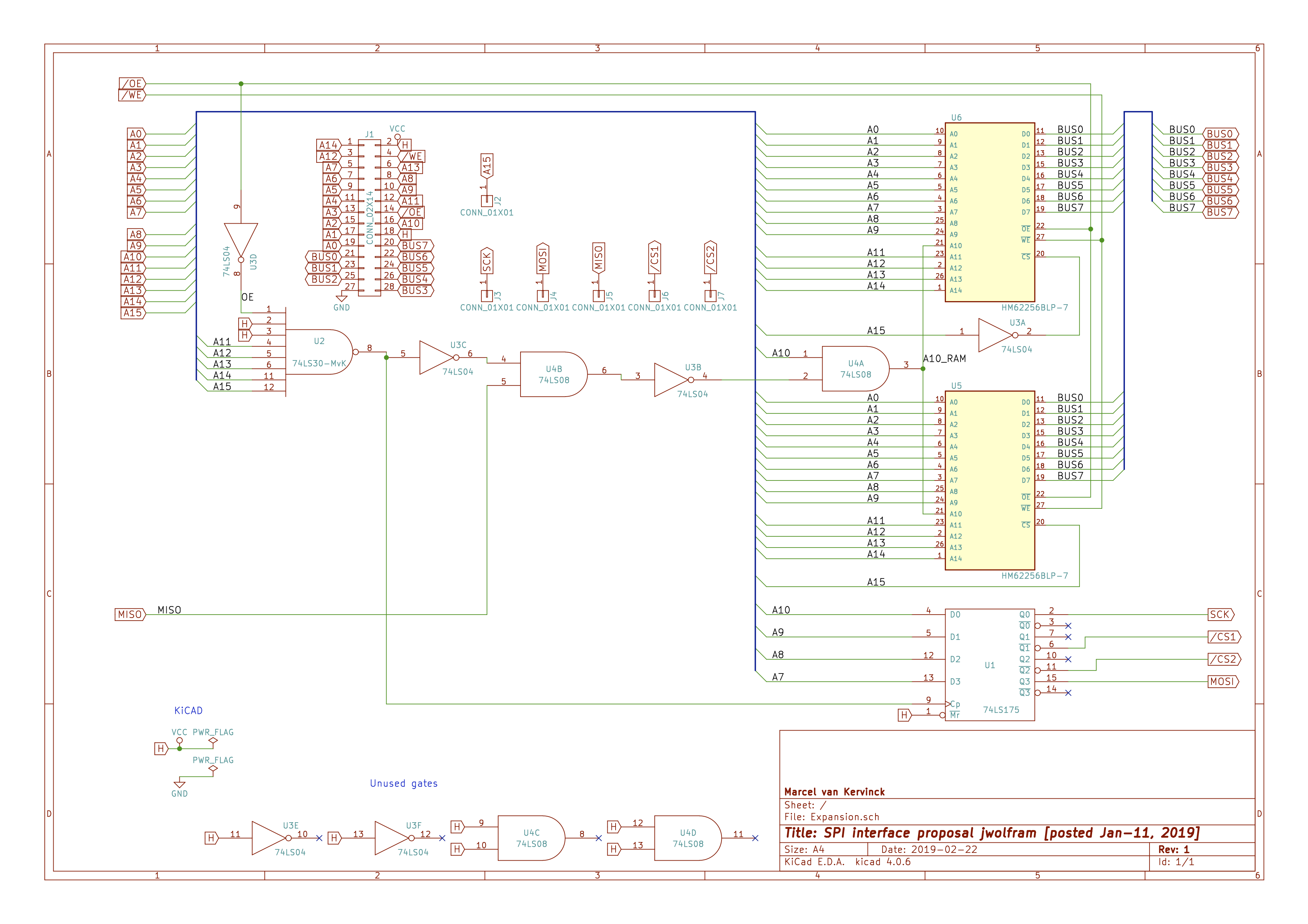 
PS: Lets ignore the differences between 74LS and 74HC(T) for now. The standard library only has the 74LS variety.

The concept is really starting to take shape - like Marcel I like a diagram to help explain things - thanks for the pdf.

Regarding parallel I/O - might I suggest the MCP23S17 which is a 16 bit port expander driven from the SPI bus.

It has two independent 8-bit bidirectional ports (similar to 8255) and is available in a 300mil wide 28 pin DIP. 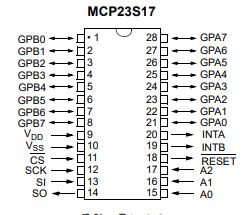 
May I also offer the suggestion that the expansion board has a suitable connector that will accept a ribbon cable. Once the bus is freely available, it would be good to have the means to connect other things to it - I am thinking of a multislot backplane - as inspired by the RC2014 - which is cheap and easy to work with. 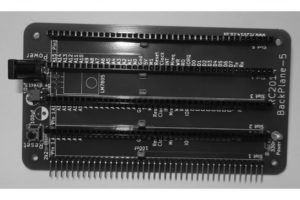