Back in Autumn 1974, the engineers at MITS in Albuquerque were busy developing what was going to become the ground-breaking Altair 8800 microcomputer - for shipment to Popular Electronics Magazine, in time for their January 1975 edition. The Altair 8800 was the first, real commercial microcomputer kit, and featured the Intel 8080 microprocessor - that alone cost a bank-busting $150 at that time.

Meanwhile, David E. Winkel had effectively reverse engineered the contemporary PDP-8I 12-bit TTL minicomputer, creating an economical design that used the latest semiconductor memory, and was about to release it as a kit - mainly to the educational market.

Winkel had designed the "Poorman's PDP-8" right on the advent of the microprocessor based home computer. Fortunately the momentum of the educational market, and the accompanying textbook "The Art of Digital Design" meant that the LD12, and its successors, the LD20 and LD30 would feature in college and university Computer Science courses right up until the early 1990s.

The LD12 consisted of a large, single sided pcb, approximately 400x400mm. The tracking on the pcb provides the 5V power and 0V ground rails, and in the memory section provided the address bussing for the Intel 2102 ICs. All of the rest of the wiring had to be done using wirewrap - several hundred individual connections.

The pcb looked as though it was "general purpose" - add a few more ICs and you could have a 16-bit machine, by adding more memory and another 74181 ALU. The wirewrap wiring defined the architecture of the machine. It was in fact "the Mother of all TTL Prototyping Boards"

The basic machine used 110 ICs - and many of these were simple gates. The 1K or 4K memory expansions were extra.

By chance, I have found the archive of the original documentation for this machine - as well as some photos of the main pcbs.

You can find this archive here:

I think I would agree 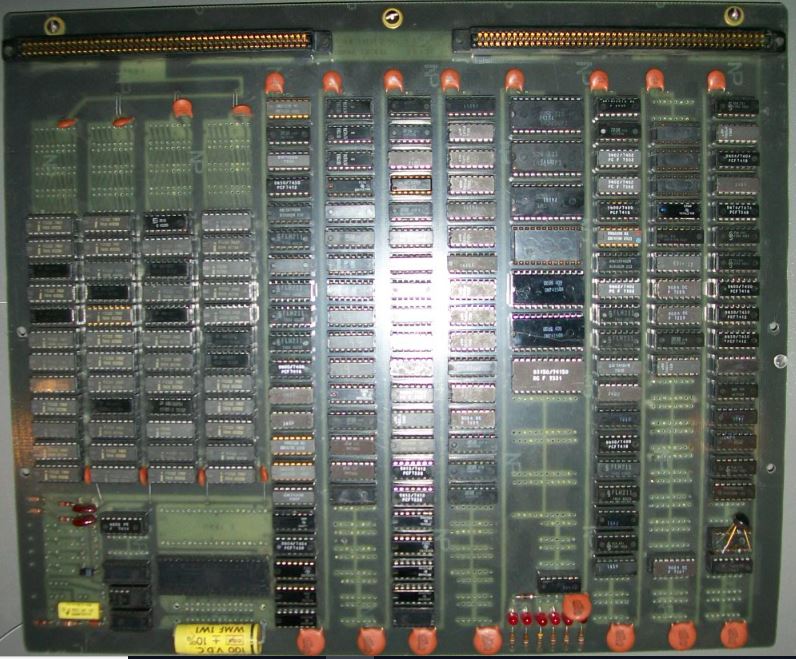 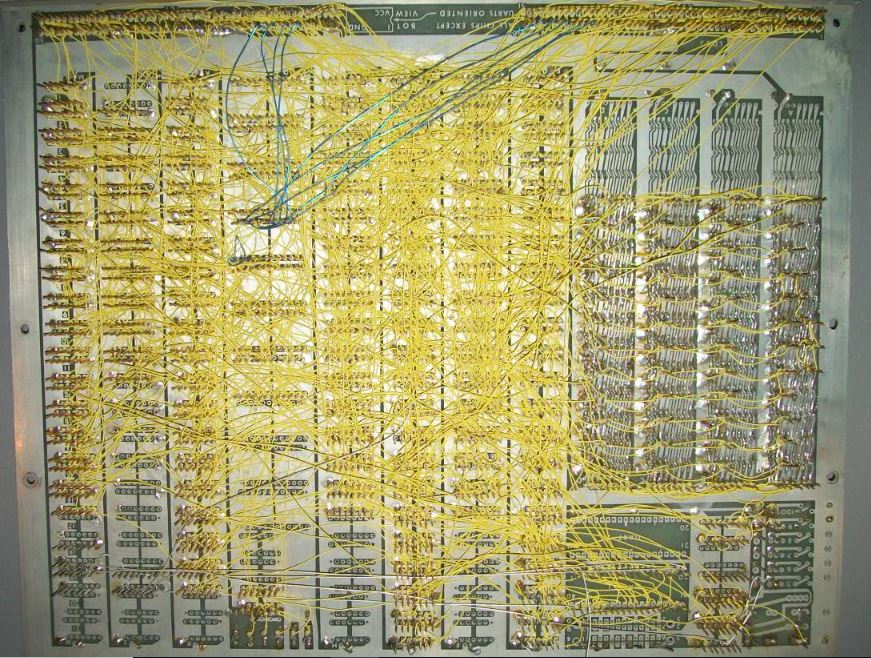 Thanks for sharing! At least it is a single-board design. Coincidently, just 2 weeks ago Oscar V. sent me a link to the bitsavers' PDF version of the Prosser-Winkel book. It is well-written and a joy to read. Personally I find chapter 12 most interesting.

In 1974 the German Elektor magazine ran a series on their 7400-based small computer design: https://archive.org/details/Computer74

Wozniak's "Cream Soda computer" would predate this by a couple of years (to before I existed).
Top

I also found the Prosser and Winkel book - and found it very interesting. To find the archive on the LD12, was the "icing on the cake". Two weeks on holiday in Portugal - I have plenty of reading time.

I was not aware of the Elektor "Computer 74", but the anycpu.org has details of the "Weeny Bitter" from 1975

The Computer 74 has a very recognisable diode ROM array

I don't recall Woz's Cream Soda cpu - but I remember one article where he dreamed of owning a 4K DG Nova - which at that time cost about the same as an apartment.

BTW - the LD12 used 110 74xx ICs, which back in 1975 would have cost about $65. The wirewrap sockets were also expensive- about $0.55 for a 16-pin socket. Once the chips were placed in the board - it was the wirewrap that defined the logic design. Compare this with modern FPGAs that have their logic blocks connected by a programmable interconnect layer.
Top
Post Reply
3 posts • Page 1 of 1