We do have an inverted clock, but it's also created by an inverter (U1). You can try and characterise a 74x241. One of its enable pins is positive, the other negative. You might be lucky if their propagations are the same, but a quick first glance at the 74LS and 74HCT data sheets is discouraging. Still, this should be a simple test. 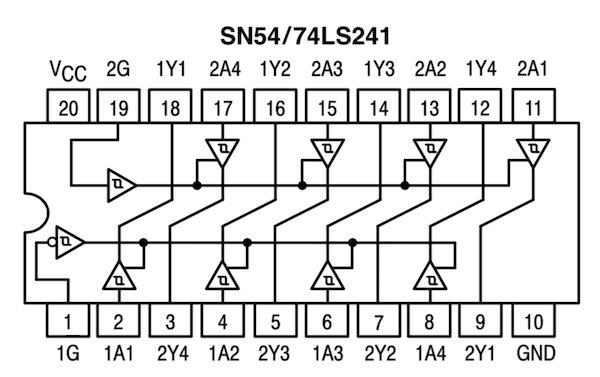 Would capacitors help smooth over the transition? And would the final chip need to be faster or slower? There are faster TTL-compatible chips, but if the signal before that is not changing fast enough, might that make it worse?
Top

The fundamental issue here is the additional state. You only want two states: "Pixel 1" (state A) or "Pixel 2" (state B), but there is also a third state: "Update Pixels" (state C). You can try and adjust the timing and hide state C in the A->B or B->A state transition. This doesn't work though since the rate at which the logic changes from 0->1 and1->0 is different. You might be able to align one of these transitions, but the other will show up. Also, this requires critical timing adjustment that will change as the chips warm up.

A little bird slipped this under my door today: a cute 16-pinner that might work as a proper resolution doubler. 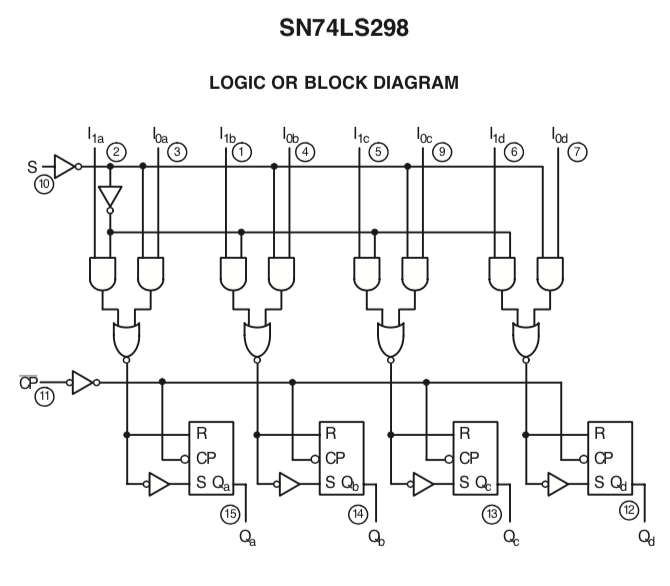 
Warning: I had a fever today, so I may still be hallucinating...
Top

Cleaning up the output with a register is good digital design. I can't seem to find a version that is CMOS and in DIP package and is not obsoleted. I'll keep looking. TTL would probably be ok. Still worst case is two chips, but it's much more slick with one. I'd still like to try the 4063 analog multiplexer chip - it looks like the select logic might be balanced in timing.
Top

Hi, I saw the Apple I story and fell down the rabbit hole. So I'm fairly new to all this, but I'm halfway through laying out my own variant in a simulator.

oh and I added a Z register to move zero page, because that was only one chip and moving zero page seems like a really useful thing. Overall I'm probably adding a bunch of new chips, but I'm not intending to be excessive, just aiming for getting the most from the least.
Top

Like you i just recently discovered the Gigatron and fell down the same rabbit hole. at the same time i started studying other vintage computer video circuits and have an idea to do do something to vastly increase video resolution while also releasing the core CPU from the huge burden it has to output every frame of video. Steve Wozniak came up with a very elegant method for the 6502 in the Apple II which can potentially be adapted here if done with some other small tweaks to the core and clocking.
By optimizing the speed and propagation delays in the core and giving it faster RAM device, it should be possible to run it reliably at ‭12.5875‬MHz and get memory access time to less than 30nS, which would make it possible to do 2 accesses per cycle - one for the core, and another to DMA video output while the core is busy fetching, decoding and running the ALU. it will require some careful tweaking of clock timing and propagation delays, but i feel it should be possible. doing that while outputting two 16-color pixels per byte, and expanding memory to 512k with paging (bye bye blinkenlights), it should be possible to get full 640x480 VGA resolution. it could also support 256 color mode at QVGA.
Even if we don't boost the clock and leave it at the original speed, it seems worthwhile trying to do this, even 1/2 VGA with no CPU overhead would unleash a lot of processing power and greatly relaxed software timing constraints.
The DMA Video output is actually pretty straight froward, while i haven't drawn up a schematic yet, the solution ( using only standard 74-series logic) will need a 20-bit address counter (5 IC's), 2 ripple counters for the syncs, and a heaping handful for combinatorial logic. if you add a set of expanded muxes for the RAM, the total IC count should be less than 20.
This might be possible to implement as an add-on card, but probably will need to be part of new Gigatrion version to achieve full speed and full VGA.
What do you think ?

I was just rereading this thread, trying to understand better the various ideas proposed earlier, and i thought i would check on the availability of the 74LS298 Marcel suggested earlier as an ideal solution.
Well it turns out its still in full production at TI ( in DIP no less) and there are over 1500pcs stock at Mouser right now, in case anyone is interested in trying that out...

So I mentioned a while back that I wrote a program to try some 4 bit digital to 16 colour RGB that was nicer than CGA's RGBI. I rewrote the program and after a lot of fiddling I came up with a resister arrangement that wasn't too complex and produced a set of colours that I thought were good. 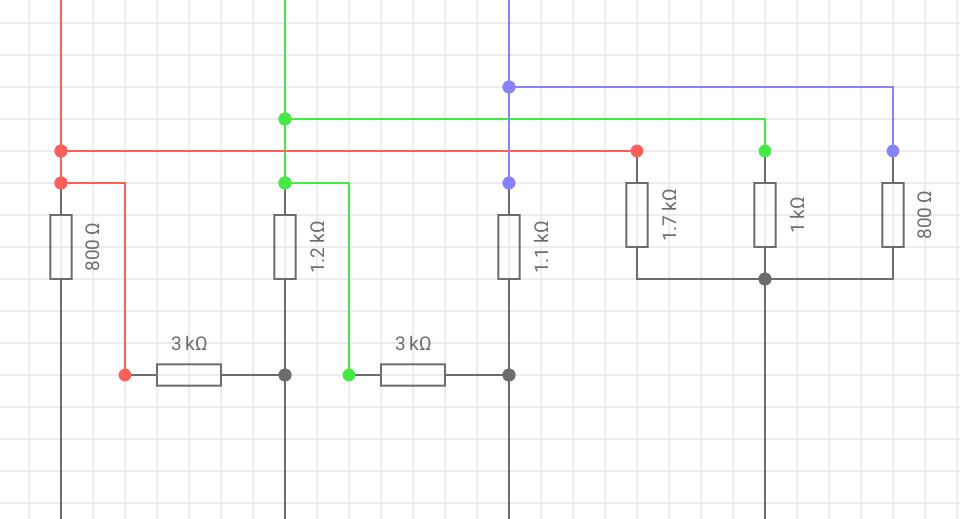 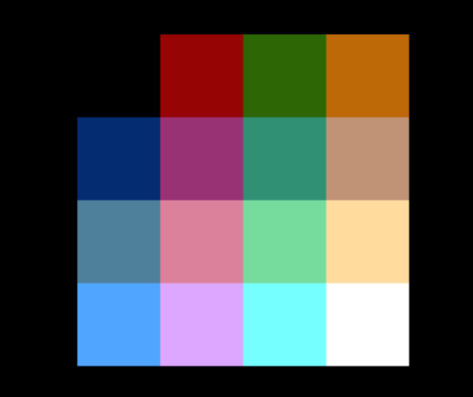 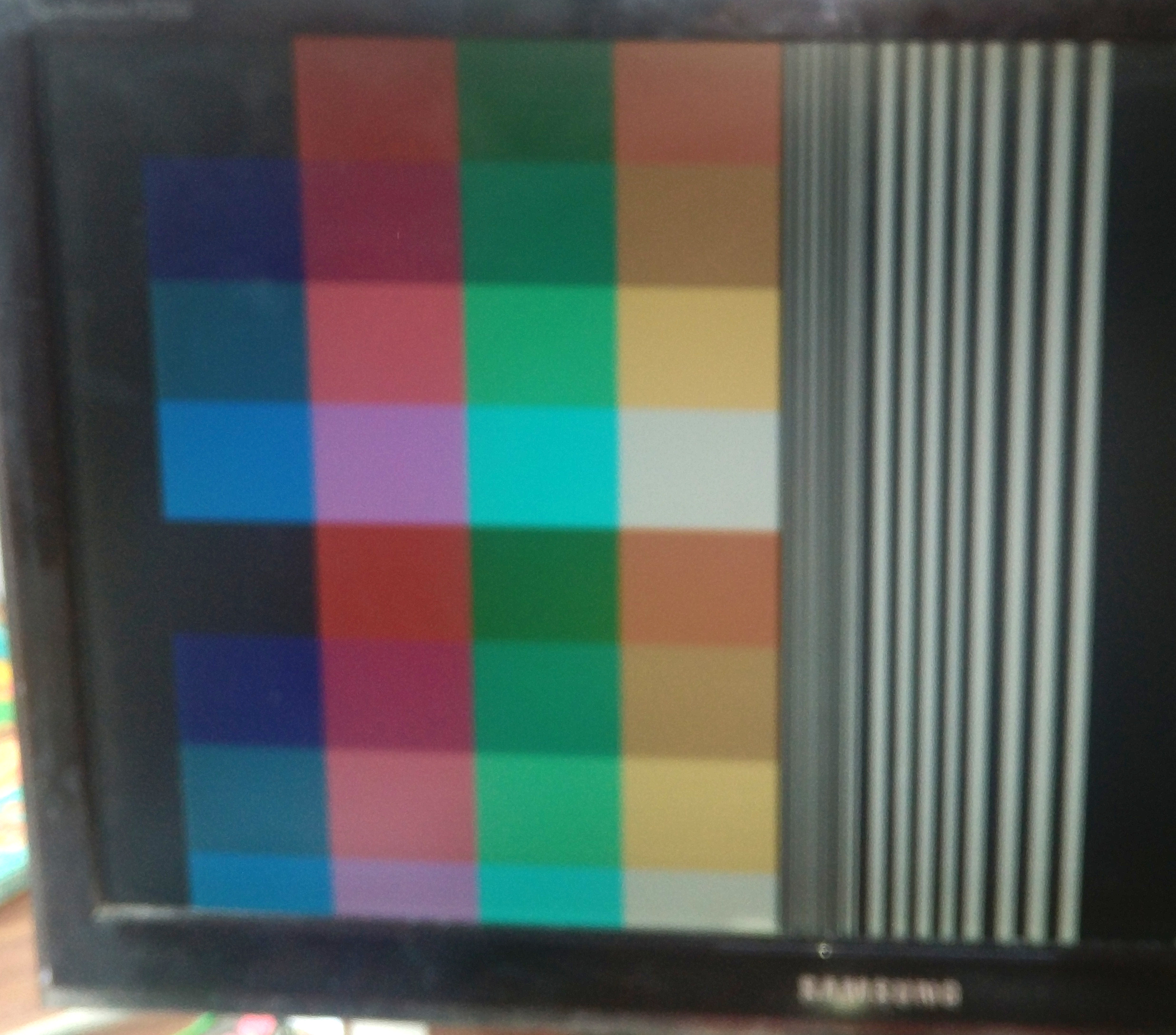 Blurryness aside I was quite chuffed at how close the colours came to my calculated version.
Top
Post Reply
39 posts