A place to eternalise your Gigatron build photos. From box to BASIC.
Forum rules
Use this forum to show off your build photos. For build issues, please consult the directions in the sticky post on top instead.
Post Reply
21 posts

Apologies in advance for a rambling post / thread. This is as much for my own records as for anything else, but hopefully my experience of building the Gigatron is of at least passing interest to someone...

I remember seeing the Gigatron when the EEV Blog video came out, and thinking that looked really cool. Inexplicably I didn't go ahead and buy one straight away; likely as it was ROM v1 at the time being reviewed, and I hadn't grokked the cool learning experience involved.

Anyway, last week I became a really lucky, and extremely happy owner of a new kit. Also pleasantly surprised that it's now on version 4!

So, I'm thinking I'll update my progress here in this thread.

I'm going to go through the steps slowly, and by the book. Hopefully everything will go (fairly) smoothly.

So far steps 1 and 2 are complete. Step 1, capacitors soldered, and no shorts... good start. Step 2, everything looks correct and soldered, and diodes and capacitor are correctly aligned... I thought. Plug in the USB cable and the LED did not light. Slightly anxious at this stage, and rechecked everything - solder joints look good, and the Schottky diode and the capacitor are definitely correct. Tried a different plug, but still didn't work.

I also checked ground against all of the capacitors, and all of them (apart from 1 I think, which didn't have continuity) showed continuity to ground on one side only).

Checked Google how to check the LED, and after putting my meter on diode mode, saw that the LED was very faintly lit, and it was showing around 2.6v wihch I think is correct...

Then I re-read the section and originally thought that it was only the two big pins on the USB connector that I soldered which were required (stupid, I know - but that's part of the learning experience). Soldered the last two tiny pins, and bingo!

Next step will be later this week...

First unboxing of the Gigatron - unfortunately there was a slight chip in the lid of the case, but it's not the end of the world. 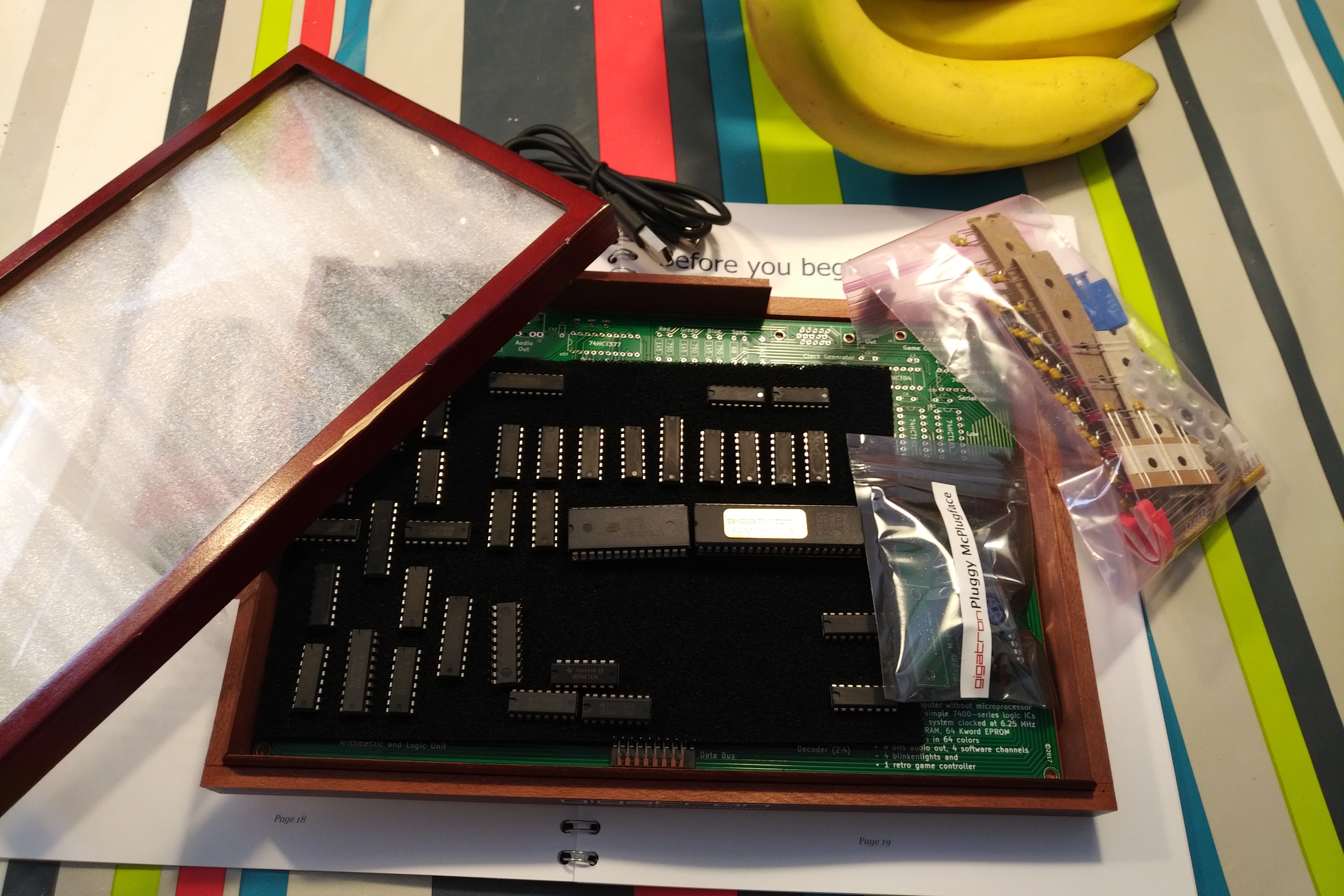 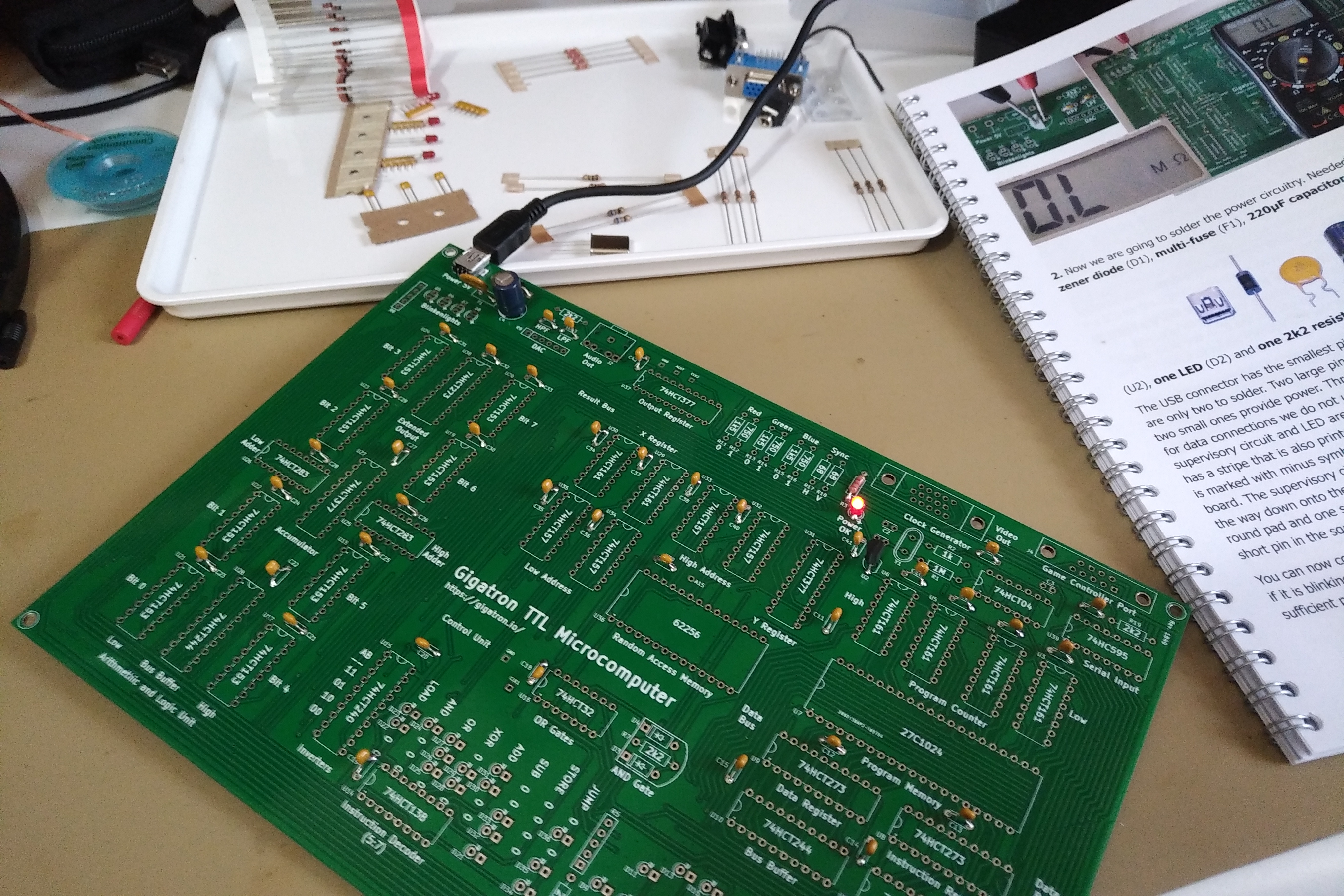 That's actually quite a big chip.. sorry for this to happen. I would have swapped it for another one - if there still had been one. I hope a bit of "mahogany red/brown" varnish can help cover it up a bit.

Good luck with the rest of the build!
Top

@walter, that's very kind. I've ordered some wood stain which I'll try to begin with, and may gloss over it if it looks okay. I just feel really lucky to have a case at all at this late stage

Just a quick pic of progress. Afraid it will take a while for me to complete - I'm kind of savouring the process, but hopefully will get a chance to complete it this weekend. 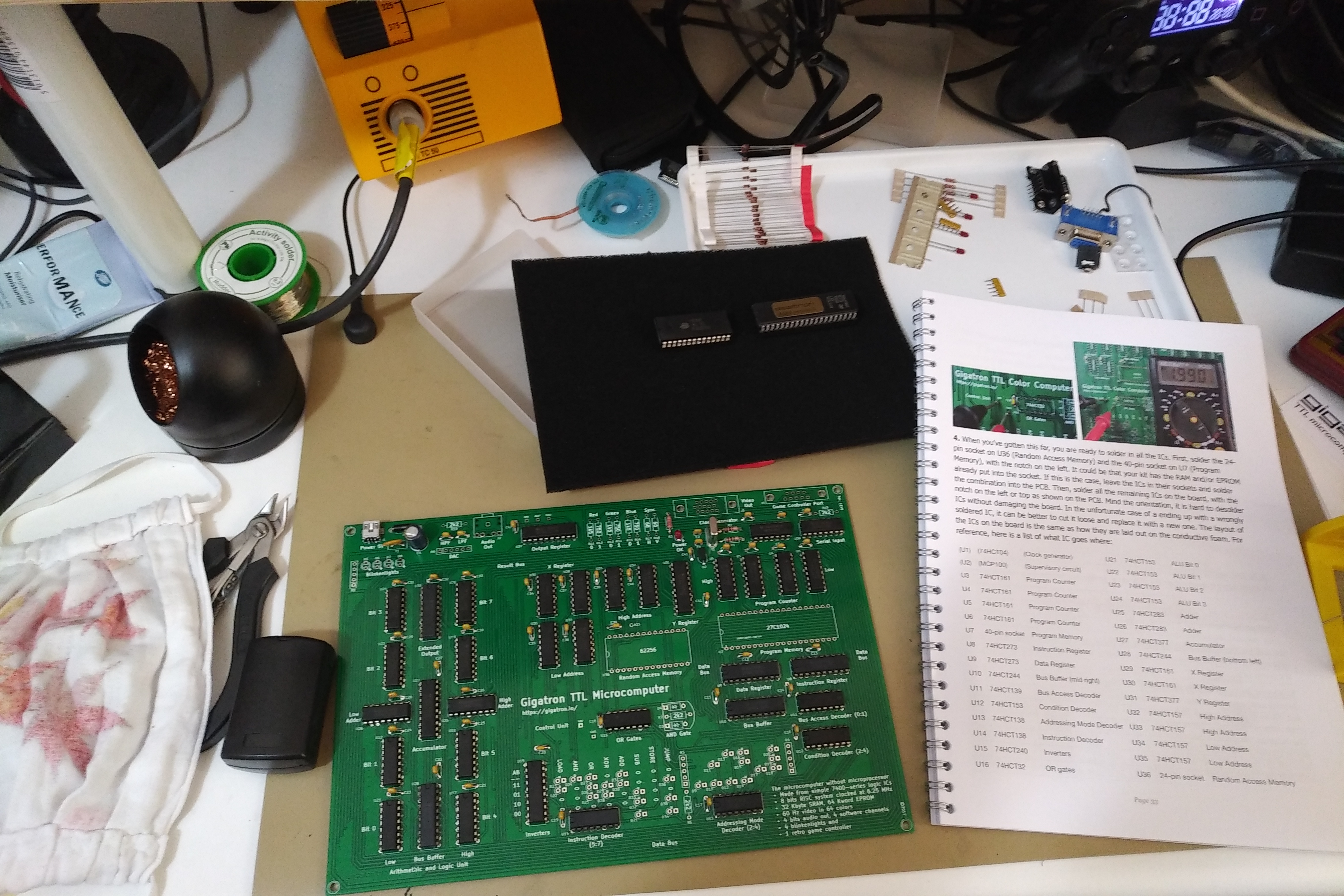 Incidentally, I wasn't expecting the ROM to be v4! That's also awesome! (is there a list of changes somewhere?)

Also, I thought I was subscribed to replies to this thread, but apparently not... so sorry to reply late.
Top

Firstly, I finished the build, and - short of finding a VGA cable in the attic - it appears to be working!

Half way through I had a bit of a scare, after soldering the four LEDs and testing it, all LEDs lit up straight away. I wanted to take a photo, but when moving the board, dropped it, and the LEDs all went off (apart from the power one). Unplugging it and plugging it back in didn't fix it at first, so I took a break. Trying again, it worked fine. Not sure what happened, but my initial concern was that I may had shorted the board on some desoldering braid I had on the desk. Not sure if it was the fuse reetting, or something else, but the LEDs have been working perfectly ever since. 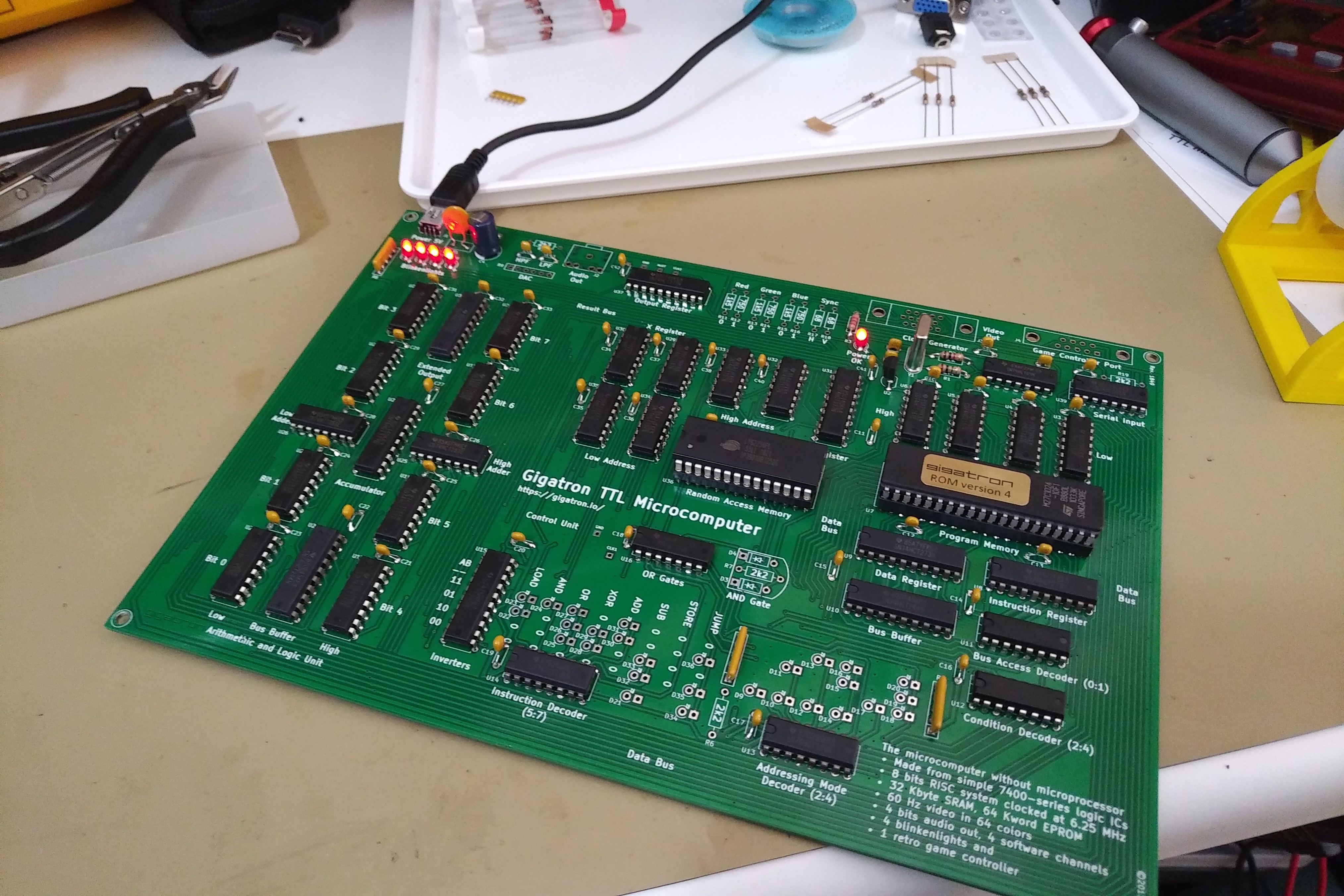 I completed the rest of the soldering - apart from Pluggy MrPlugFace... 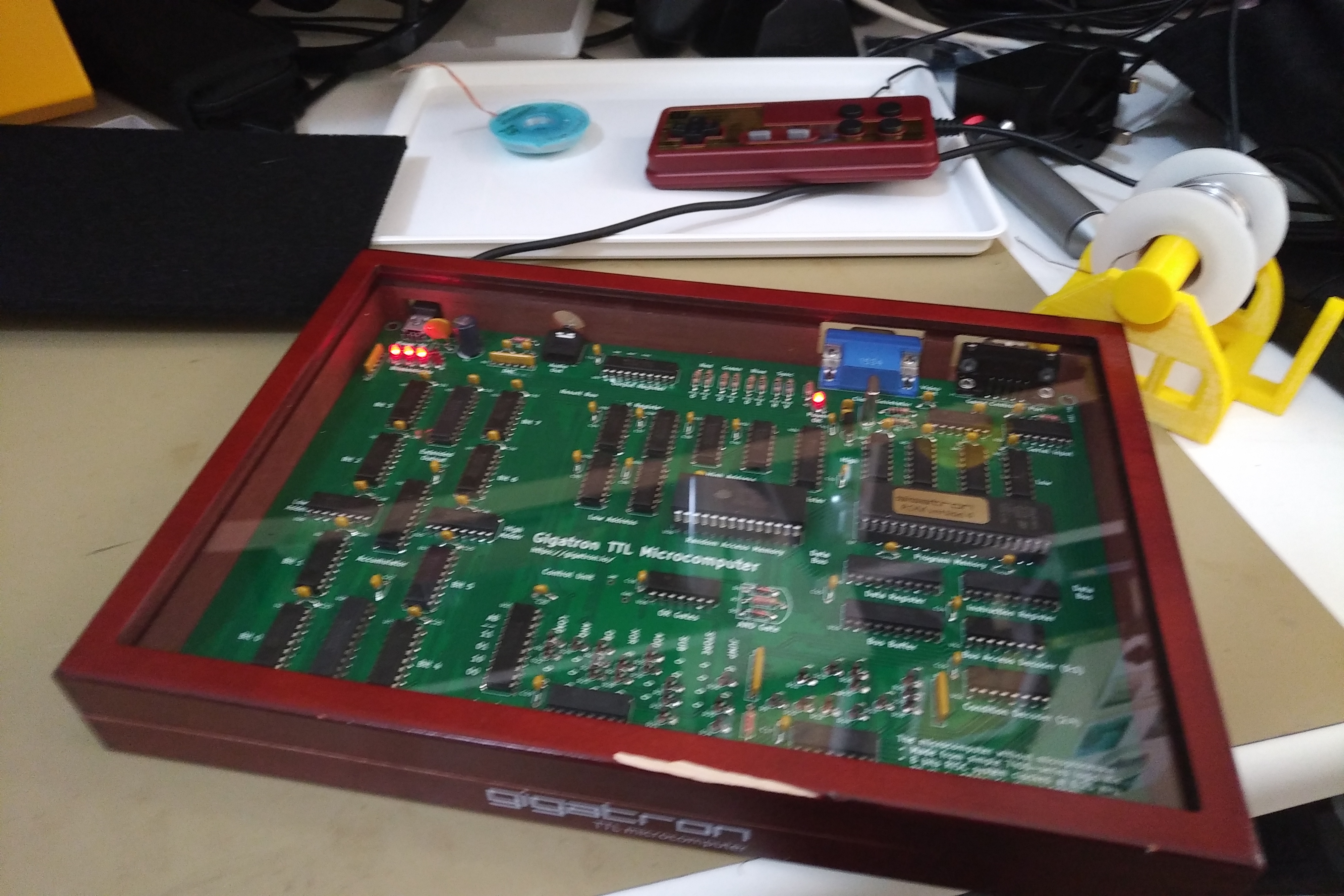 And the best news is my wonderful wife somehow managed to find the missing chip (of wood), so now the case also looks (almost) perfect! 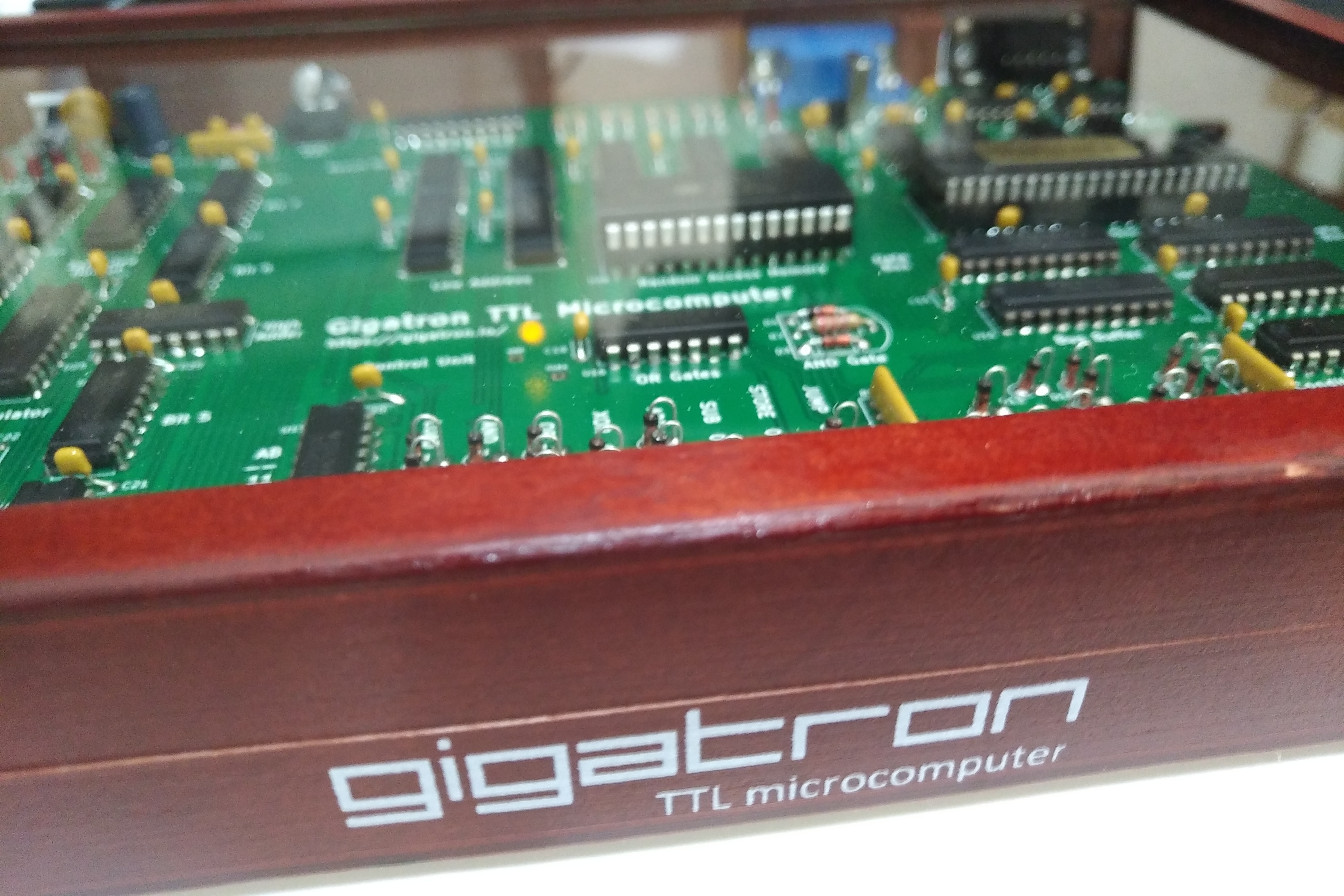 It could indeed have been the soldering braid. The power circuitry is well protected so the unit will survive. And good to hear you found the little chip!
Top

I've said it before, but I love how well designed the kit is, and going through the process with the manual is so satisfying! It's one thing I was disappointed about in EEVBlog's video as he didn't look at the manual, or consider the reasons you have for recommending installing the components in the order as they are set out (and the review for v1 ROM was a little unfair).

I feel like I would like to play around with my oscilloscope at some point to get more of an idea what's going on inside (and also to actually use it!)

Also, random question - where's the best place I should look if I wanted to send a program to the Gigatron? Would I need to use an Arduino? Incidentally, I have tried a few times to search the boards here, but it keeps complaining that words are "too common" and doesn't give any results.
Top

Congrats on your Gigatron build RetroCode, and welcome to the community!


Also, random question - where's the best place I should look if I wanted to send a program to the Gigatron? Would I need to use an Arduino? Incidentally, I have tried a few times to search the boards here, but it keeps complaining that words are "too common" and doesn't give any results.

To send a program to your Gigatron, you first need to flash the BabelFish firmware to your Arduino which is located in the Utils directory of the GitHub repo: https://github.com/kervinck/gigatron-ro ... ster/Utils

Next, connect the Arduino to your Gigatron like this: 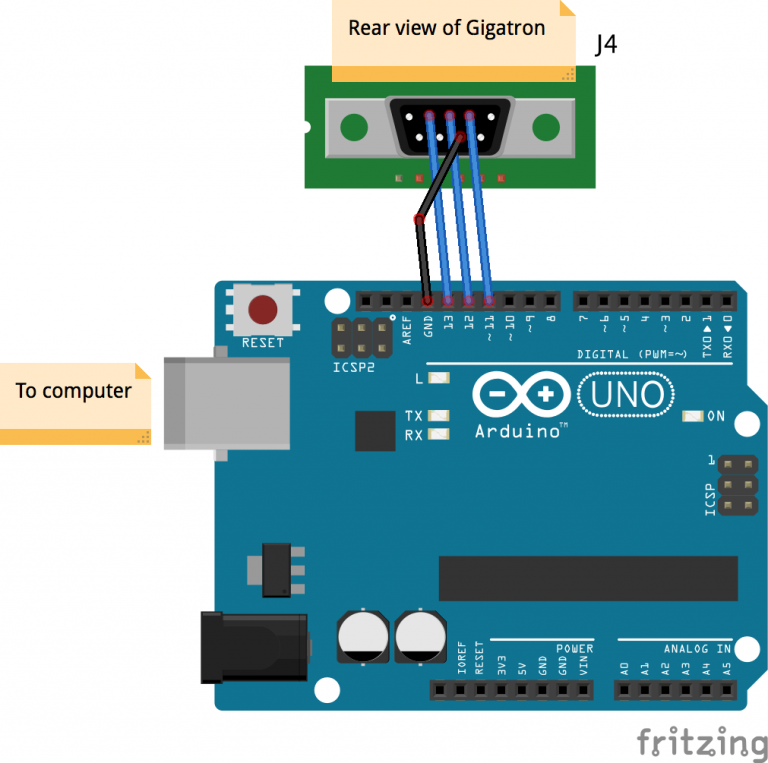 Once that is done, you can send the desired .gt1 file to your Gigatron using the sendFile.py python script (which is also located in the Utils directory). Good luck!
Top
Post Reply
21 posts